It’s been a fascinating few days (for Neil).

When a pastor seeks accreditation by the Baptist Convention one of the final steps is an interview by the other pastors. So, one afternoon, I found myself on a 40 minute moto (motor bike taxi) from Iquitos to a small community where, along with a number of other pastors, I got to interview Rousbelt. Rousbelt planted the church here when the community was formed a few years ago. (In 2012 there were severe floods and the government offered land to people to move here from some of the worst affected areas) and he also attended the training course here in Nauta. 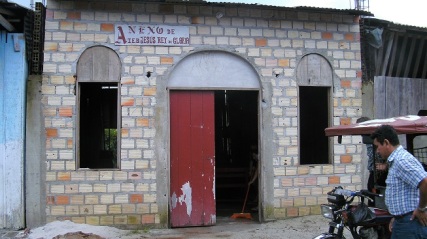 In true ‘baptist’ fashion the meeting started with a discussion about the minutes for the day and how my role should be described. But once the details were sorted out we read 1 Timothy 3 and used this passage as a template for the 90 minutes we spent listening to Rousbelt. The first two questions are set and prepared so the candidate can talk about how they became a Christian and why they think God has called them to be a pastor; but the majority of the time was for questions and eight of us got to ask questions. The focus of the questions is doctrinal, but there were a few which picked up things from Rousbelt’s testimony and general lifestyle. My questions focused on the role of the Holy Spirit in the church and Baptist distinctives. The aim of the questions, as the chair pointed out, was not to ask difficult questions to trip Rousbelt up, but to give him an opportunity to show that he was qualified for the role.

In some ways it was very different to ministerial recognition in the UK, where there are fewer questions about doctrine and lifestyle. Also, the meeting was open, so as well as those of us taking part, there were others (mostly from the church who came to support Rousbelt) who sat at the back and watched.

And at the end we agreed to commend Rousbelt…… well technically we’d agreed that at the start when we agreed what the minutes needed to say.

So on Saturday afternoon we then gathered back at the church, along with others from local churches to ‘install’ Rousbelt as an accredited pastor. This felt more similar to an event in the UK. The meeting started with worship and then a number of people spoke. The secretary of our interview panel gave a report, a representative of the church explained how they commended Rousbelt and one of the long standing ministers in the association acted as ‘master of ceremonies’ before the pastors laid hands on Rousbelt. There was a very brief word (very, very brief in Peruvian terms where people are used to long sermons) from the Association President. At the end there was chicken and rice to celebrate….. but we didn’t stay because…….we hurried back to Nauta for another event we’d been specifically invited to. [I say hurried but it took three and a half hours].

In the evening the training centre we hosted a wedding for one of the local church leaders. It was a little unusual in that the local registrar came to do the civil ceremony at the beginning before Pastor Percy (who leads Antioquia Baptist Church in Iquitos) led the religious ceremony. At the end of the short service people shared their good wishes and, although the couple (Julio & Hermelinda) have been together for years, several also gave words of advice before we celebrated with chicken and rice. The main party dressed up but overall it had a casual, joyful feel as family and community gathered to mark the occasion.