My post on Baptist Assembly suggested I’d blog something about discernment and how we might create space to do so.

The problem is that Assembly is too big a gathering to use many of the techniques familiar in Church Meetings. In groups of 30-100 people can get to know each other, in groups of 1000 they can’t. I remember reading some social commentator who suggested that people’s sense of group satisfaction is highest in groups of 6-10 or  40-70; the group dynamics are different for each but a sense of working together is quite achievable. Social interactions are different in the two groups but both make use of those interactions and the norms they create in order to get things done. Larger groups are possible, particularly when people have some relationship to / affinity with the chair and primary speakers but it gets increasingly difficult as the group passes the 200 barrier. Baptist Assembly is a particular challenge because it is an annual event, it is large and it’s not easy to see how an individual fits in or makes a contribution. If it were a local church based on a congregational ecclesiology it would probably work through representative decision-making with clear communication, good feedback and intentional listenin; but it plays an important role in denominational life.

My experience of Assembly is that we struggle to make the opportunities for meaningful participation. I’ve sat through enough public resolutions where the aim was laudable but the motion was essentially ‘this assembly is against sin and wishes people were more holy’; where a few people who have a particular enthusiasm for the topic speak but the majority remain silent. I’ve also sat through sessions where people break into small buzz groups and then feedback stories or answers to some inane question. Nowadays I consider both as invitations to visit the bar or chat over coffee.

To do better will n 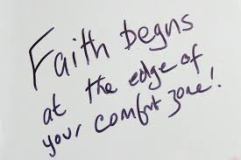 eed clarity about the type of issues to be discussed and discerned at Assembly. It is harder than it looks because the answer will be those key policy items that direct the overall approach and direction of the denomination over a 5-10 year period. The trouble is crucial policy issues can often seem quite abstract whereas participants find it easier to get to grips with an issue that has clear, specific and measurable outcomes. So what can we do?

Be clear on the question. What is being asked and what is at stake? For example, with the Futures process it was possible to suggest several possible ways forward and to list the advantages / disadvantages as well as the practical implications of each one. Once explained, people can then give their opinion. A variety of well prepared voices, offering a range of opinion can help here.

Help people prepare. It is easier for people to take part when they have had opportunities to explore the issues before hand. An example might be the current discussions about human sexuality, where there are a number of places in denominational life that this is being discussed and where, if we wanted, we could start to move the conversations towards some decisions which would be agreed by Assembly. Other ways of preparing people involve briefing papers, video clips and the like.

Create multiple ways to contribute. Assembly is too big to do things like breaking into groups with ease, but buzz groups can help people engage with the issue. Likewise social media provides instant means of feedback and asking questions. A quick way of gauging opinion is by using coloured paper; in place of yes/no votes people can indicate one of five responses, allowing folk to indicate holding an opinion strongly or less strongly.

Be open, honest and vulnerable. The danger for any organisation / large conference is that those who speak do so in a way that sells their point of view. There’s nothing wrong with enthusiasm and vision casting but the ethos of discernment requires everyone to come with an attitude of listening, displaying a willingness to change and being open about the struggles; inviting others to share in discerning the mind of Christ.

Be intentional and allow time. Most of the things I’ve noted above have been part of Assembly thinking in recent years. What’s needed isn’t revolutionary, rather it requires us to be intentional about creating space and recognise that listening and discerning take time and can be hard work.