It all feels very strange but I’m safely back from my adventure. The last few days have made my brain very fuzzy.

It started off on Friday morning when we got the Colectivo from Nauta. (It’s a sort of mini bus with 12-15 seats, and when its full it leaves). Our cases were put on the roof, alongside a huge number of bananas. We were then dropped off near the airport as this is on the route back into Iquitos and we walked with our cases, now covered in banana bits, into the airport. After we checked in and had lunch we learned that the plane was delayed. By the time it took off it was 5 hours late – I was a very bored bear because there’s nothing to do at the airport.

It was very late when we got to our room in Lima but the next day it was warm and sunny so I went out to explore the area. We went to a supermarket (it seemed really, really posh after months in the jungle) and bought some things to bring back.

n we walked along the sea front. I’ve not seen the Pacific Ocean before; apparently it is huge and goes all the way from South America to New Zealand. I think I might like to go there and see it from the other side.

They have big signs on the beach warning of Tsunamis; apparently they are really big waves that can kill lots of people so I’m pleased we didn’t see any as I’m a very small bear. 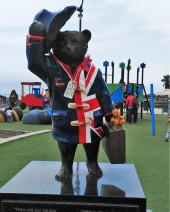 After a quick lunch we went to visit my friend Paddington. He suggested I keep walking along the cliff tops, so we visited the Parque del Amor and then watched people paragliding off the cliff before stopping at a small café for coffee and cake.

We had a really nice taxi driver back to the airport. Neil

and Lori had a long chat with him: I didn’t understand it as I don’t really speak Spanish but I think his name was Uber.

The flight from Lima left on Saturday evening. It was a long flight and took 12 hours. We landed soon after breakfast but it was already getting dark in Amsterdam. And then we sat in the airport and waited for our flight back to Manchester. It was 11 o’clock at night when we got home and I was very tired.

Thank you for reading about my adventures.