I’ve just returned from an amazing couple of weeks in New Zealand; most of the time being spent in Christchurch; the largest (only) city on the South Island. I went as part of a sabbatical to see what Baptist Church life looks like in New Zealand; but also because we have built a link with a church there. 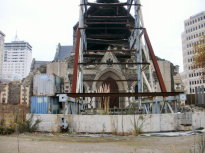 Spending the first few days looking around the city was a strangely moving experience, coinciding with the Nepal earthquakes. Christchurch was hit by two large earthquakes in September 2010 M7.1 and February 2011 M6.3. Even four years later evidence of the damage and destruction done is still everywhere to be seen; not least in amount of reconstruction work still being done but also in the number of damaged buildings which still remain and large areas which have been cleared of buildings and housing.  As I moved around the city, in a country with good governance, the money for rebuilding and the infrastructure to respond to disasters, it was hard not to feel for those in Nepal; a country which has fewer resources and capacity but which now has to respond to earthquake devastation. I was also aware, though little was said, of how the events in Nepal seemed to bring back memories and unsettle people.

Many will know I’ve had the opportunity to visit Peru on several occasions in recent years so it felt strange to visit a country where people speak English. I flew on Emirates who do their announcements in Arabic and English; via Dubai, Bangkok and Sydney. After all the hours travelling through foreign airports it feels odd to emerge down under where they speak the same language, but are much less reserved than the UK. However, the cultural lesson is important. In Peru I’m always very aware that I live in a different culture and although I’m visiting to teach, I try to be sensitive to the fact that it is hard not to export one’s own culture. In New Zealand it is easy to forget that this is a different culture and that people’s lives have been shaped in another context; particularly since there are so many extranjeros from the UK, US and Australia and the TV carries many UK and US shows.

My reason for visiting as part of my sabbatical was to learn more about Baptist life in New Zealand and Christchurch in particular. NZ Baptists have a reputation for being more mission focused than the UK and I wanted to see if that is true and learn about the vision, values and leadership of churches here. My next two blog posts will detail some of my thoughts on this.

As well as my time in Christchurch I also spent a few days away further inland at Lake Tekapo, an opportunity for retreat, prayer, reading and walking. In theory my reading is mostly connected to church culture and leadership but in practice my time here has been more an opportunity to reflect on God’s love.  More on this in a later blog.

New Zealand is a great country, Christchurch is a lovely city to live in. I can see why so many people emigrate here; indeed if the right opportunity came along I would happily join them.

Thank you to Rob & Monica, Roger & Norma as well as the many local church leaders who made me so welcome.